"...had the whole audience clapping along creating an electric atmosphere..."- Bob Tilling, Blues In Britain "You guys have too much fun!" - Doug MacLeod

Lee Bates and Billy Newton are one of the UK’s finest Blues duos and are widely recognised as being two of the finest performers to emerge from the Northeast of England, an area long synonymous with authentic Blues players.

Billy Newton is one of the hottest harmonica players around. Over the course of his musical career Billy has played with more than his share of Blues greats, including; John Hammond, Little Charlie and the Nightcats and William Clarke, even jamming with legendary Chicago Blues star Jimmy Rodgers! After years spent playing in bands such as The Acme Blues Company and The Scandalous Bachelors, Billy returned to his acoustic roots when he teamed up with Lee Bates.

Lee Bates is a fine guitarist and singer. Playing the blues since his teens, Lee appeared with artists such as Bob Brozman, Woody Mann and Isaac Guillory among others before joining Billy. Lee is regarded as being one of the best slide guitarists and every show features some great slide on National and electric guitars.

Together they deliver a hugely entertaining set of tunes taken from the Delta, Chicago, Jug Band Blues, Old Timey and beyond all delivered with a dose of irreverent humour.

Lee and Billy have appeared at countless Blues venues and festivals, including: Colne R’n’B Festival, Upton Blues Festival, Isle of Bute Jazz Festival, Dundee Blues Bonanza, Orange Evolution Festival, Banbury Blues and more. They have shared stages with everyone from British Blues stars Bob Hall and Steve Phillips to Doug MacLeod and Honeyboy Edwards from the USA among many others.

Lee Bates and Billy Newton are quickly gathering a reputation as one of the most authentic and entertaining acts around. Their most recent CD release ‘Nothing But Trouble’ has received radio play all over the world as well as being voted one of Blues in Britain Magazine’s top CD releases .

“You guys have too much fun!” - Doug MacLeod, great Bluesman from the USA

“If country blues is your thing, you’ve come to the right place.” - Michael Prince, Blues in Britain magazine

“These guys really kicked up a storm...they had the whole audience clapping along with great delight, creating an electric atmosphere.” - Bob Tilling, Blues in Britain magazine

“Well worth seeking out.” - Blues Matters

Lee and Billy's CDs; "All Talk And No Action" and "Nothing But Trouble" available now!!

"Nothing But Trouble" Also available to download from this site, CD Baby, itunes, Amazon ...

Or listen to us on Spotify!

Read our interview on the Early Blues Website here. 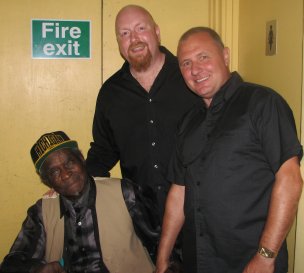 Lee and Billy with the legendary Honeyboy Edwards after their performance at the Cluny, Newcastle upon Tyne